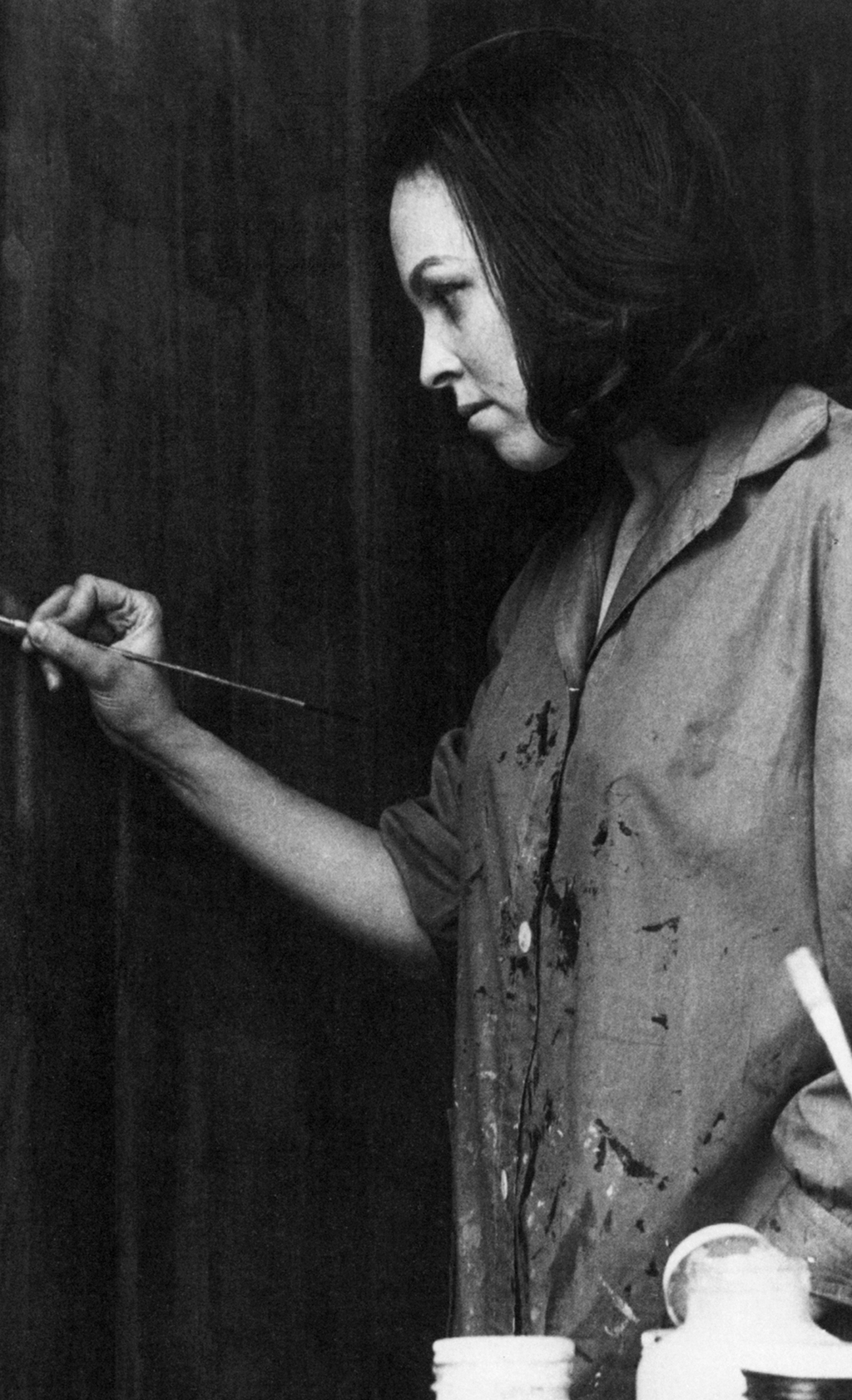 Born and raised within a modern Orthodox Jewish community in Boro Park, Brooklyn, Helène Aylon was married to a rabbi at the age of eighteen. While in her mid-twenties, she quietly enrolled as an art major at Brooklyn College, taking classes with Ad Reinhardt who became her friend and mentor and arranged for a studio visit with Mark Rothko, a transformative event for the young artist. After she became widowed, with two young children at the age of thirty, she chose to to enter the secular art world.

Aylon's professional art career commenced in the 1960s with commissioned murals at Kennedy Airport and the New York University Medical Center. Her first solo exhibitions in New York took place in 1970 and 1972 at the Max Hutchinson Gallery followed by one person exhibitions in 1975 and 1979 at the prestigious Betty Parsons Gallery, her last New York representative until she joined Leslie Tonkonow Artworks + Projects in 2018.

Beginning in 1969, she experimented with the idea of creating “painting that revealed itself,” introducing her evolving feminist consciousness to a medium that had, by then, been dominated by the notion of a heroic, and almost exclusively male, American idiom. Refraining from “mark making” (“I didn’t want to be hammered in by exactitudes”) she allowed the works themselves to inform the evolution of her ideas.

The paintings in the Elusive Silver series (1969–73) were her first distinct group of process-driven works, made in her East Village studio with industrial materials such as sheet metal, acrylic plastic, and spray paint. In 1973, after moving from New York to the San Francisco Bay Area, she began two new series that were implicitly political in their refusal to adhere to traditional notions of permanence in art: Paintings That Change in Time (1973–76) and Pouring Formations (1977). Painted with linseed oil on paper, they were described by the critic Peter Schjeldahl as having an "imagistic rhetoric at once physical and metaphysical," intended by the artist to continuously evolve and change with the passage of time.

Aylon introduced performance to process in her last series of the decade, the monumentally-scaled Breakings (1977–79). During events at galleries and alternative spaces, she poured several quarts of linseed oil onto large sheets of paper affixed to Masonite panels and left them in place on the floor for several weeks while the oil developed a skin. The “breaking” occurred later when the artist, with several collaborators she referred to as "midwives" (Betty Parsons, Nancy Spero and Hannah Wilke among them), lifted the panels, allowing the oil to escape. The resulting works were her most explicitly feminist statements of the time with the process referring to childbirth and the resulting images suggesting the female body.

In 1980, Helène Aylon decided to “leave studio work behind” and to instead engage in a social practice consisting of installations, actions, and objects that dealt with feminist, ecological, and religious issues. Through her growing commitment to environmental and anti-nuclear activism, she produced symbolic events with the participation of other women, first across the United States, and later in Israel and Japan.

She returned to New York In 1982. That year, in perhaps her best-known work of the decade, she enacted Earth Ambulance, by driving a truck disguised as an ambulance across the United States. En route, she piled earth from Strategic Air Command nuclear bases, uranium mines, and nuclear reactors into pillowcases, arriving in New York with the “rescued” sacks in time for a nuclear disarmament rally at the United Nations. Ten years later, in celebration of the end of the Cold War, a variation of the piece was presented at the Brooklyn Bridge Anchorage by Creative Time.

In 1985, to mark the fortieth anniversary of the bombing of Hiroshima and Nagasaki, Aylon traveled to Japan where she performed two sacs en route. Collaborating with a group of young Japanese women, she placed sacks filled with rice, grain, pods, and seeds in a river, to float toward the two cities. A new iteration of this piece, scheduled to take place in August of 2020, in commemoration of the 75th Anniversary of that event, had been in preparation at the time of her death.

In the 1990s, the artist began to revisit of her cultural, spiritual, and familial roots with the G-d Project, a twenty-year examination, through objects and major installations, of Jewish traditions and theology from a feminist perspective.

Helène Aylon has participated in one-person and group shows in museums and galleries throughout the United States, Europe, and Israel including, among many others, the Whitney Museum of American Art; the Institute of Contemporary Art, Philadelphia; MoMA PS1; the Berkeley Art Museum; the Hammer Museum, Los Angeles: the Aldrich Museum, Ridgefield, CT; and the Jewish Museum, New York.

She has been the recipient of numerous honors including, among many others, three awards from the Pollock Krasner Foundation, two fellowships from the National Endowment for the Arts, two fellowships from the New York Foundation for the Arts, and a Lifetime Achievement Award from the Women’s Caucus for Art. Works by the artist are in the collections of the Whitney Museum of American Art; the San Francisco Museum of Modern Art; the Oakland Museum of California; the Virginia Museum of Fine Arts; the Jewish Museum, New York; the Morgan Library and Museum; and those of many other distinguished institutions and private individuals.

Helène Aylon: Elusive Silver 1969–1973, the artist's first solo show in a New York gallery in forty years, took place last year at Leslie Tonkonow Artworks + Projects. Her first one-person exhibition in Los Angeles, a survey of works from the 1970s, was on view at Marc Selwyn Fine Art from January 18 to February 22, 2020. Recent group exhibitions include Shifting Terrain at the San Francisco Museum of Modern Art (scheduled to remain on view through Spring 2020) and By Any Means: Contemporary Drawings from the Morgan Library and Museum, New York (January 18 – May 12, 2019).